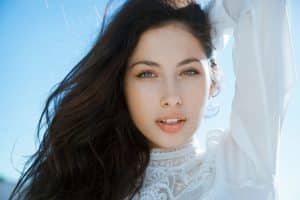 The Mini Facelift is a very popular procedure these days. Why? Well, the long and the short of it is the type of incision used. Whether you refer to it as an S Lift, Weekend Facelift, Quick Lift, Lifestyle Lift or some other name, what distinguishes the Mini Facelift from its full-fledged relative, the traditional Facelift, is the shorter length of the incision. Since the procedure targets only those areas of the face that are just beginning to wrinkle and sag, the incision is often confined to the front of the ear rather than running around and behind it. It’s a minor outpatient procedure requiring only local anesthesia and it can be done in 90 minutes or less with the patient wide awake.

In a traditional facelift, the incision typically runs from about the temples, in front of and around the ear, to behind the ear and ending in the lower scalp. Working through the incisions, the skin is separated from the deeper tissues. The skin is then re-draped and any excess skin is removed. It’s a more complicated procedure designed to reduce the appearance of extensive sagging and wrinkles of the lower face and neck.

Patients who opt for the Mini Lift are often in their 40s or 50 and don’t exhibit major signs of aging. The jawline may only show moderate drooping. There may only be a few shallow wrinkles and facial lines. The facial plastic surgeon’s views for the Mini Lift as a more localized approach to improve one’s facial appearance. It require much smaller incisions through which surgical tools are used to extract excess fat and reshape muscles so that a softening of facial lines and wrinkles is achieved quickly and with much less downtime required during the recovery process. The Mini Lift is also a less costly way for men and women to reduce minor sagging around the cheeks, neck, and jawline with minimal risk of complications during and after surgery.

Many patients prefer the Mini Lift because of its targeted approach, its cost effectiveness – roughly half that of a traditional facelift – its nearly immediate results, and its fast recovery period. Though your results will depend on a variety of factors, the Mini Lift is an excellent way to tackle the flaws and blemishes of early aging head on. A qualified facial plastic surgeon can help you decide which procedure is right for you.

Next, learn about The Impact of Weight Loss after a Facelift.

Settle for Nothing But the Best